Wow! I can't believe I haven't updated since April!! The boys finished soccer last month and we went right into t-ball. This is Gabe's second year of t-ball. We got really lucky with both the boys teams this year because they both have friends on their team. This is Ryan's first year and he's playing blast ball. It's basically like t-ball but instead of running to all the bases they just run to first. The base squeaks when they step on it and it's so cute! Gabe is my little social butterfly and loves the fact that his friends are on his team. He did great at his first game last week. He had lots of fun too! Ryan is a completely different child at home than he is at the ballpark. He's just so shy! At home he's way into sports and he'll the hit the ball as hard as he can and he'll wrestle his brother for the ball. At the ballpark with people he doesn't know quite so well he's just so timid. The first practices he just cried and cried and I was really worried he wouldn't want to play. But we kept at it and at his first game he did so good! He hit the ball and ran to first like he was supposed to. I was so proud!
Kate is growing up! She's crawling around and pulling up like crazy! She's into absolutely everything!! At her last doctors appointment she was 29" long and 18.5 lbs. The doctor told me I needed to fatten her up because she's a bit on the skinny side. So we've started pushing the table foods a little more. She's getting such a little personality. She's becoming more and more ornery. One of her favorite things to do is try to hit the spoon of baby food when I'm feeding her. If she gets it and it gets all over the place she just smiles and laughs at me. She also loves her brothers! She loves watching them wrestle around and she wants to join in so bad! I'm sure one day she'll be giving them a run for their money!
We set up our little pool in the backyard and the kids have been swimming like crazy. Kate went swimming for the first time a couple days ago and she loved it! It's been a good summer so far. We're really looking forward to our vacation to Florida coming up!! The boys are really excited and they ask me everyday if it's time to go to the beach. We can't wait! 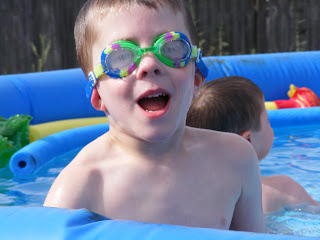 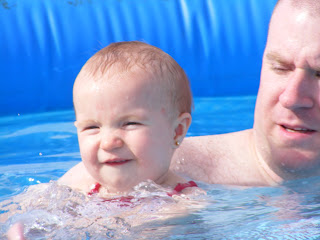 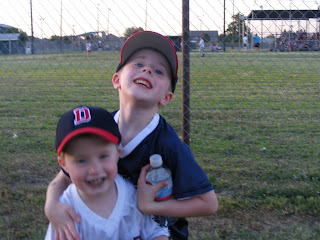 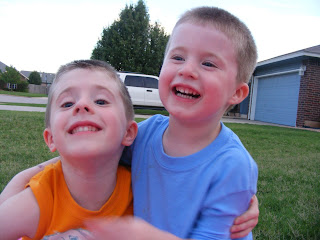