I always knew Ryan would be the first one to break a bone and I was right! He's just such a fearless rambunctious child. His dad calls him Tank if that tells you anything. On Tuesday afternoon we were at the store finishing up a busy day. Ryan was running around like he usually does at the end of the day. All of sudden he ran past me and somehow, I'm still not sure how, he slipped and fell. I heard a loud bang and he got up holding onto his head. At first I thought he busted his head just because the way his head hit the ground. But he wasn't bleeding anywhere. He kept rubbing his head. After a few minutes he was still crying which is unusual. Ryan usually recovers from falls pretty quickly, hence the name Tank. After a few minutes of crying he went from rubbing his head to holding his shoulder. After debating about whether or not this was a serious injury Matt and I decided just to take him over to the urgent care just to get things checked out. After the doctor saw that Ryan couldn't raise his arm over his head they decided to do an x-ray. And sure enough he had a broken collarbone. They gave us a prescription for some pain medicine and a sling and referred us to an orthopedic surgeon. We went to see the orthopedic surgeon the next day. He told us that Ryan is young enough that the injury should just heal itself. We just have to watch him to make sure he doesn't hurt it again. So that means no running, jumping or just being the crazy kid that he is. He's been pretty good about watching what he does. 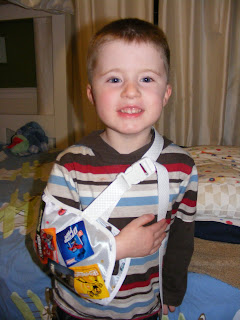 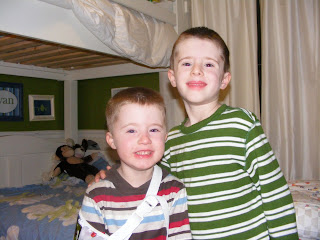